This note I found on the web today made me laugh so hard I spit up my coffee.  It’s one of the best ever.  I’m not usually a fan of spiking food, but this was so awesome I just had to share it.

The note says the following…

To the food stealers,
It has been about a month now since my brownies started disappearing randomly. Even though my name was on the tub. My husband helped my 9yo daughter bake them for me, so I hope you enjoyed them as much as I couldn’t. My previous fridge notes fell on deaf ears, so I decided to take more direct action.

So I made an anonymous report to HR. Something about culture of drug use and the potential liability to the company blah blah. That is why we all had to do a random drug screen yesterday.

And did I forget to mention that for the last two weeks I have been spiking the brownies with marijuana? Not much, not enough to give you a buzz. Just enough to show up on a drug screen. 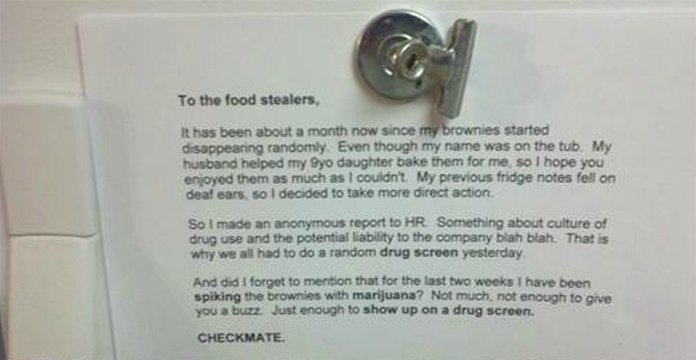